Is Brexit a zero-sum game for your business?

The UK’s complex negotiations to exit the EU can only begin when Article 50 of the Treaty of Lisbon is formally triggered by the British Government. The Notification of Withdrawal (the European Union Bill) has commenced its journey in Parliament with a view to serving the notice before the end of March 2017. The terms of exit will then be negotiated between Britain’s 27 European counterparts, and each will have a veto over the conditions. It will also be subject to ratification in national parliaments, meaning, for example, that Belgian MPs could stymie the entire process.

Beyond the Brexit rhetoric however, many business leaders grapple with what the impact of Brexit could mean on their businesses.

Brexit captures nicely the essence of the phrase “inflection point” used by Andy S Grove the co-founder of intel in his book published twenty years ago –  Only the Paranoid Survive. A strategic inflection point is a time in the life of business when its fundamentals are about to change. That change can mean an opportunity to rise to new heights. But it may just as likely signal the beginning of the end. At a political or economic level, an inflection point can be illustrated by such moments as the fall of the Berlin Wall or the unforeseen financial crisis of 2008. Anticipating change should be part of the psyche of any business leader. As Larry Page, Googles Co-Founder said: “...Over time companies tend to get comfortable doing the same thing, just making incremental changes. But in the tech industry, where revolutionary ideas drive the next big growth areas, you need to be a bit uncomfortable to stay relevant.”

Generally, businesses particularly those from conventional industry sectors are too slow to innovate their firms unless they experience a crisis –  and even then, their response tends to be reactionary and short-term focused.

From the Institute of Innovation and Knowledge Exchange’s perspective, we have seen systematic shifts in how companies create a strategically valuable position, often reinforced by the constraints of their ecosystems within which they operate. For example, the behaviour of the aerospace, defence and transportation sectors is shaped by how governments fund and licence projects.

Today, the dynamics of competitive advantage have shifted even further. The pervasive drive of digitisation means businesses can achieve advantage through access to assets rather than ownership of them. Uber - the world’s largest taxi company valued at $66 billion owns no vehicles, and Airbnb- the world’s largest accommodation provider valued at $30 billion owns no real-estate. The expansion of ‘platform’ companies such as Amazon, Google, and Apple is creating the networks effect – the more customers a company has, the more valuable it is to each additional customer. This begs an important question - is data more valuable than money? For example, Alibaba’s digital payments arm - Ant Financial, has over 500 million clients, 10 times the level of the world’s biggest banks!  GE manages assets in aviation, healthcare, transportation, power, water and oil and gas valued at over $1 Trillion through Predix, its cloud based operating system for the Industrial Internet. The so called ‘networks effect’ is rewriting the business rule book.

Brexit is just another data point in the ever changing flux of business. Brexit offers a great opportunity for organisations to use it as a ‘reset-button’ to start to re-model and re-configure their focus and galvanise their employees, customers, partners and stakeholders to assess their competitive advantage and reassemble their ecosystems to identify and create new and sustained opportunities for growth. Purpose, adaptation and agility should be the three tenets that support such a transformation.

So, how do I go about managing this uncertainty? Where do I start? And, what steps should I consider?

Well, we would suggest three interrelated stages that a firm can undertake prior to remodelling its business and ensure decision-makers make informed choices.

Firstly, the Review Stage. A company’s board and the senior leadership within a business should begin by reviewing and documenting all the business’s touch points with the European Union (EU), however minor and such a review should include:

Secondly, the Scenario Planning Stage. The focus here is primarily on building different cost-revenue models that projects the enterprise value and its health over a 5-year horizon, recognising the Brexit negotiation will take about 2 years, and subsequently, a further few years to create new trade agreements. Factoring in extra time for complexity, should also be considered. The scenario planning should include a ‘what if’ analysis using the following components:

Thirdly, the Alternative Markets review stage. The focus here is on suitability of markets for your product portfolio including future offerings. A useful tool that could be used here is the ‘From – To Exploration’ matrix, which will help a firm assess the impact and value of exploring, entering and developing new market opportunities.

Following these stages, boards and senior executives can then undertake re-modelling with some confidence as to the level of impact on their businesses. Putting the re-modelled plans into action requires consideration of intended or unintended consequences, in terms of opportunity and the level of risk. The following should be included in such a consideration:

With the re-modelled business in place, the disjunction between innovation and business strategy erodes dramatically. Strategic Planning determines the life or death of a business. Innovation becomes a mandated business function and a licence to pursue dreams. Responsiveness, adaptation and agility – the new elemental capabilities, and customer and market intelligence interweave throughout the business, pervasive and all-consuming, providing steer and pre-emption of new trends and growth opportunities.

Trade is a positive-sum game and not a zero-sum game. Differences (i.e. deficits) can be resolved by developing creative and effective multilateral agreements at a business or at a macro level.

As this new moment in economic history dawns, Brexit could be a Positive Sum Game for the UK, helping her to escape the low growth trap that is still plaguing many a developed economy. 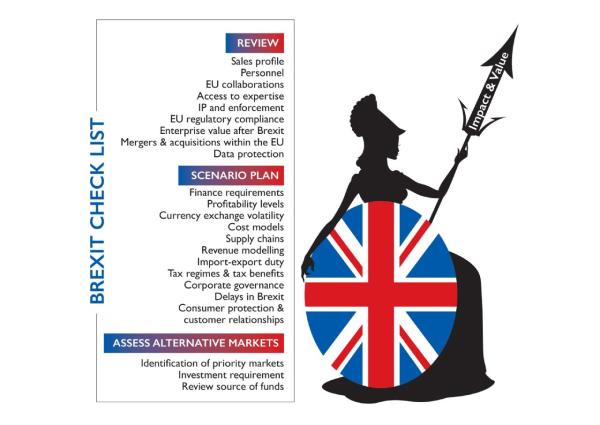